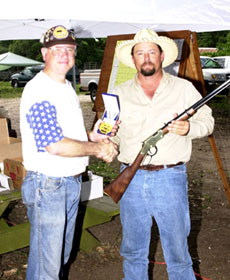 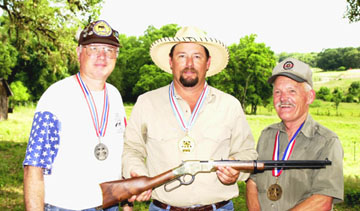 Well, the first thing I'd like to ask y'all to do is to make a donation to the Red Cross or some other organization like that. We were hammered and the resources they have used to help our friends and neighbors will more than likely deplete their reserves. I hope all of you were able to make it home without any difficulty and once you got there, everything was ok. Guess I made the wrong call about leaving. Sometimes you got to do things that ruin your plans and this was my time this year. Shot the heck out of my vacation.

I was awakened by the rainfall early Saturday morning, real early. Turned on the scanner to see what was happening and for some reason turned on the TV. Live coverage from the flooding all over Houston and surrounding areas put the fear in me. Watched for a couple hours and then called Tom. Woke him up. He went outside and called me back saying that he had three feet of water in the street. From the newscast I knew he wasn't gonna be able to get out of the subdivision for a while. I left Katy about 5:30 and had a semi-soggy drive to the range. I tried to convey the magnitude of the situation but was unsuccessful in getting the match postponed. After all showed up and decided to shoot, I went back to the house to await the expected deluge that didn't happen. Burned again.

We want to thank all who came out on Friday to help get everything in order for the match. When I got there, Nolan and Sean/John were working on the mower. Broke out my weed eater and commenced trimming. We had several people show up with mowers and other tools of destruction. Can't remember all who were there but I do remember that Dave Cook managed to show up just as everything was winding down. His timing is excellent but we know he'd a been there earlier if he could of been. Can't think of anything more to say. Guess I'm still not in good humor. See ya in 2 weeks if the creek doesn't rise.

I also want to excho Butch’s thanks to all of those who came out for the work party on Friday. The work performed at these functions tend to last us the rest of the year. Had I known what was in store for Houston Friday night, I would have stayed somewhere in the Columbus area.

Fortunately, my house is in one of the highest areas of our sub-division so we were in no immediate danger of flooding, unless the roof caved in under the deluge. However, I wasn’t about to attempt to brave 3 feet of water in a new truck Saturday morning and was lucky enough to have the water recede enough to allow me to get to the range in time to shoot my relay. Thanks for scheduling me 4th.

Also, thanks to all who helped get the match under way Saturday morning in my absense. Thank you to Holly Long and David Pierce for running the match Saturday, and for David’s help on Sunday. It wasn’t intended to be that way but high water has a tendency to alter one’s plans.

Our turn attendance was off a little bit this year but I’m attributing that to the probability of huge deluges. Based on the weather maps Friday morning and that night, I wouldn’t have made book on the match being held without a mud bath.

All things considered, the match pretty much ran without a hitch. If someone can come up with a design for a scoreboard with magnetic name plates, it would make moving someone up a class a lot easier and ease the mistakes of trying to locate all of those who changed class when it comes time to pass out the awards. Unfortunately, a couple of minor mistakes were made in that area but were corrected without any hard feelings.

See you next year.