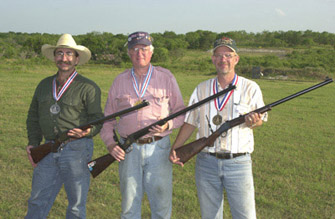 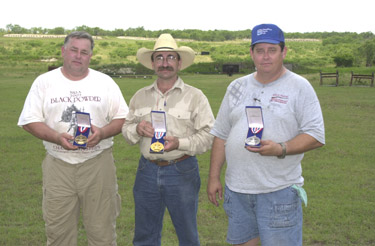 Just a few paragraphs or so on what your cub reporter managed to remember from the 1st day of the Texas State Championship. The rumble of thunder that woke me up Saturday morning about 1:30 didn’t bode well for the Y.C.S.A. group. Then it dawned on me that I was going to be headed north, not west. I dozed for a few more minutes and when the alarm went off I was ready for the road trip. I turned the scanner on to get the National Weather Service and see what the chances of rain were going to be.

I don’t know how Mr. Tom B managed to fool Mother Nature but he did. The thunder earlier was from a storm just west of Katy that dropped between 6" and 10" of rain. The Interstate just west of the Brazos River was shut down. That’s the main drag that all of would be using if the State Match were being held at YCSA. I had a wet spot on the driveway but no measurable rain that I could tell. I got my stuff packed and headed to Mexia.

It was misting just a little on most of the trip up to about Hearne. I got to thinking that the last time I made that same trip we had a tropical storm coming ashore when I left. That was for Cyber Uno. Sunrise around Calvert sure was pretty. The rest of the trip up was uneventful.

The H.O.T.S.A. guys sure did a great job of expanding the range since I was there last. The berms were pretty well limestone colored with the black targets. The rain had left some shadows but as the day wore on, the shadows disappeared. There wasn’t much wind when I got there but by about 2:00 in the afternoon it was blowing about 20mph. I got to meet some people most of y’all know but I never met. Most famous to the cyber crowd would be Kelley-O. He was a member of the International Team that went to Bisley and was reported to be a member of the "Tomahawk Team". Real nice guy. John Walters was there and I got to learn about his wad business. I always wondered how he made his wads and packaged them. Much easier to buy them from him than to punch them myself. Squire Pickett was over from Georgia to watch and lend moral support. I know I’m leaving out a lot of folks but I’m doing this from memory and y’all know how that goes. Dave Gullo was down defending the title. I hope everyone shot well. From the scores recorded on Saturday it looked like there was going to have to be a shootoff on Sunday.

The format that was being used made the match go flawlessly from my point of view. I really like the target setters and I hope y’all tipped them well. Without them, you’d probably still be shooting. The only complaint I heard was about the wind and sun. That indicates a well planned out and run match. Congrats to Tom and the host range and crew. Thanks to Liz Riddles again for her assistance in scoring and keeping things running. She threatened me that if I didn’t move, she was gonna put me to work.

I hope everyone enjoyed himself or herself and shot to the best of their ability. I realized that it’s the friendships that one makes that are more important to me than a perfect score. I sure hope to be back shooting in the next month or so. I’ll let Tom fill in the blanks and I’ll see y’all the 2nd match in June that I will be running for Tom so he can go do honeydo’s.

For those of you who appreciate shoot-offs, the 2004 Texas State BPCRS Championship had many to watch. The match had a record attendance of 71 competitors from 5 states and the weather cooperated this year by not dropping any moisture on us during the match. The wind, however, was plentiful and made for a very interesting couple of days under the Texas sun.

After the competitor meeting Saturday morning, it was apparent after the match began that those who could get a "handle" on the wind would fair pretty well and those that didn’t, . . . We had a quartering, switching wind all day that would allow shots to sail high when the head wind let up a little and of course would knock it down when strengthening.

Day 2 arrived with even more wind which was blowing almost directly from the targets to the firing line. Of course, it wasn’t steady and the gusting nature of it conspired to further reduce overall scores during the day. The day’s high score was carded by Gordon Hines with a very respectable 29. Another chicken shoot-off was required to break the 3-way tie for 2nd through 4th at 28 between Tom Berwick, Jack Hawkins and David Barnes. The second shoot-off was won by Tom Berwick, with Jack Hawkins taking 3rd place overall and David Barnes becoming the High Master for the day.

Prior to the chicken shoot-off to break the day’s 2nd place tie, a shoot-off on chickens to determine High Senior was conducted simultaneously with a 5-way shoot-off on turkeys to break the tie for high turkey count. Leland Johnson bested LeRoy Tanner in their chicken shoot-off to claim the High Senior title. Drew Pumphrey did not miss a single turkey in the 5 target tie breaking match to claim the Montana Vintage Arms gift certificate for high turkey count.

Following all of the aforementioned tie breakers on Sunday, David Barnes and Tom Berwick lined up on the chicken line to determine the overall match winner as they were both tied with very respectable 60’s. By now, the wind was blowing consistently toward the firing line making standing in place and holding on the chickens somewhat problematic. Having only 7 "chicken" loads left, Tom was bound and determined to make them count and managed to get 2 of the birds after 1 sighter shot to David’s total of 1 and finished the match as the overall winner with 1 unspent round remaining.

We had 3 Junior shooters this year and they fared quite well. Chance Mabry, a sub-Junior, won the B class while our Junior Champion, Tyler Jones, came in 2nd in the A class as well as putting a drubbing on his poor ole’ father. Congratulations to all our Junior shooters as they did an outstanding job this year.

Finally, our match would not be nearly as successful without the continued support of several vendors. A hearty "Thank You" goes out to Montana Vintage Arms for their very generous support of our sport, SPG and Black Powder Cartridge News, Walter’s Wads, Brooks Molds and Knives, The Single Shot Exchange, and last, but certainly not least, Jim Kirkland of Schuetzen Powder for his generous contribution of black powder.

Next year’s match will again be held at Heart of Texas Silhouette Range and with the planned reworking of the firing line to increase firing points, we will be able to handle a maximum of 120 competitors. We were 1 competitor short of being maxed out this year and the match has been increasing in size almost yearly. With HOTSA’s commitment to range expansion, we will be able to continue to allow the match to grow. Everyone make plans to attend next year’s event which will occur June 4-5, 2005.

The First Annual TSRA BPCR Scope Match was conducted at the Heart Of Texas Silhouette Association range located in Wortham, Texas. We were blessed with excellent although windy conditions which made itself felt through out the day. Twelve shooters were able to take advantage of the day’s shoot and hopefully next year, we’ll be able to attract more competitors. Since this is a relatively new branch of our sport, not everyone has the requisite equipment yet.

Due to the relatively low number of competitors, we squadded up on 2 banks of animals which cut down on the number of target resets. Everyone quickly found out that a scope in strong winds doesn’t make the chickens any easier to knock down. In fact, the little pollõs even more difficult to hit. Since we had a nice, partly cloudy day, the heat started building up rapidly as did the mirage.

Mirage started playing its usual tricks later in the day. At one point the mirage was running upward against the bank of turkeys while on the rail it indicated left to right. Now, that classifies as a pretty tough condition to read. Shooters made the observation that the pigs and chickens seemed to dance up and down in the scopes and the result was a pretty tough site picture.

We had to conduct a chicken shoot-off to determine the winner of the MVA gift certificate for high chicken count. Three competitors were involved in the chicken count shoot-off which was ultimately won by Bill Pace.

After the chicken count shoot-off was determined, we conducted a 3-way shoot-off to determine the ultimate match winner and State Champion. David Barnes, David Brady and Jay Lee all had scores of 25 carded and a 5-chicken shoot-off ensued. Mirage and wind conspired to hold the shooters to 1 chicken amongst the 3 competitors and David Barnes had that hit. David Brady and Jay Lee then went head-to-head in a sudden death match with the each firing a shot until one hit a target with a subsequent miss. David Brady basically outlasted Jay Lee in the shoot-off to claim 2nd place by hitting a chicken on the 4th shot of sudden death.

Thanks to all of the vendors for their support of the match which included Montana Vintage Arms, SPG and Black Powder Cartridge News, and The Single Shot Exchange. Next year’s match will be held in conjunction with the iron sight match once again and should be the Friday prior to the main event.