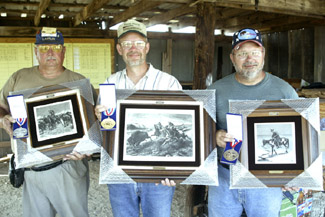 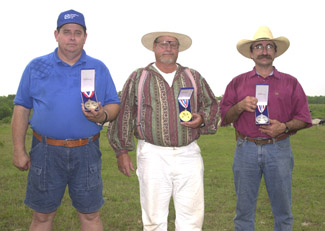 The 10th Annual Texas State Black Powder Cartridge Silhouette Iron Sight Championship enjoyed its second consecutive sell-out with the full complement of 72 competitors. The difference this year was that we had to turn shooters away due to the desire to compete in this tournament. Heart of Texas Silhouette Association (H.O.T.S.A.) still intends to rework the firing line and target area to reconfigure the range to 6 banks of 5 targets. If this occurs, we will be able to handle a larger group of shooters in less time. Six full relays make for an extremely long day and if we have the inevitable cattle herding situation and then shoot-offs late in the afternoon, we run the risk of losing good light on the targets.

Day 1 completed with some of the usual cast of characters firmly entrenched at the top of the leader board with Gary Krutilek posting a High-of-Day 30, followed with Ken Wienken and then Butch Ulsher. With the new NRA scoring breakdown in place, it was problematic that any Master Class scores would be recorded during the entire match. The Saturday match proved that the difficult mirage and switching wind conditions would help to hold scores down. HOTSA has a very good range and would have to be rated as one of the toughest anywhere in the country to shoot very scores due to the conditions A real premium is in place that the shooter/spotter team be able to detect and compensate for the subtle and not so subtle shifts in conditions. This was especially true on the first day of competition as the mirage built all day long.

Day 2 arrived with another partly cloudy, low humidity offering. Overall, the conditions were very similar to Day 1 and scores, for the most part, were about the same as the previous day. Some folks learned from Saturday’s fun in the mirage and heat and were better able to figure out the changes. The rest continued to struggle with the constant changes in wind and mirage.

Our Sub-Junior, Joseph Ward, winner of the Scope Class Junior award, set a 2nd National Record in Iron-Sight with a very fine total of 33. What’s amazing is that Joseph usually manages to hit at least 1 chicken each match, even with a scope in place. This is especially interesting in that a lot of sub-juniors are barely capable of holding the rifle in the general vicinity of the chicken, much less score them any consistency, simply due to a lack of upper body strength at that young age. Congratulations to Joseph on his accomplishment.

As luck would have it, we had a tie for 2nd & 3rd overall requiring the ubiquitous chicken shoot-off between Don Claxton and Bobby Ivey. After a long day of shooting and waiting for the next opportunity, it is somewhat of a problem to hit a pesky chicken when you really need it. This was the case once again with Bobby and Don going toe-to-toe on the chicken line. After a tie remained with the initial 5-shot shootoff concluded, a sudden death match was conducted. Bobby Ivey was persistent enough to finally knock a chicken off of the rail before Don made contact thus claiming the 2nd overall spot.

High Master honors went to Doug Gazaway, High AAA to Bob Rosenbaum, High AA was won by David Brady, High A went to Jack Brabham, High B was claimed by Joseph Ward, High Senior was awarded to LeRoy Tanner, High Woman was drilled by Faye "Termite" Nunn, and High Junior was claimed by Joseph Ward. Congratulations to all of the 2005 match winners. Also, our heart felt thanks go out to our corporate sponsors who donated many of the match prizes. These include Black Powder Cartridge News, Montana Vintage Arms, Schuetzen Powder, DLG Lube, Brooks Knives and Moulds, Paul Jones Moulds and Walters Wads. Additionally, thanks go to Glen Dickson for creating and producing our match day awards.

Finally, thanks go to our troops in the various battle zones. Don’t forget them.

Three additional die-hard silhouette fans showed up on the off-chance that there would be a competition slot remaining to compete in the 2nd Annual, 2005 Texas State Black Powder Cartridge Silhouette Scope Championship held at the Heart of Texas Silhouette Association range in the Mexia/Wortham area of Northeast Texas. As luck would have it, several spots remained for the 1-day scope championship while the iron sight version was fully subscribed.

The weather was sunny and hot with the occasional patchy cloud drifting by. By the time we got to 1:00PM, it was downright hot, a trait the Mexia area is known for. With the mirage swimming by and causing the animals to appear to shimmy in the skinny, period style scopes, the day became very challenging for the shooters.

Master Class visitor from Montana, A.P. "Butch" Ulsher bested the field by posting a 30 on the windswept group of entrants. The late arrivals to the match boosted the total to a best ever group of 17 shooters besting the inaugural year tournament held last year by 5 entries. This match is growing as people find out it is fun and a huge challenge to shoot the old smoke poles with a period style optical sight. Chickens, while never easy to shoot offhand, do seem to dance quite a bit more when using optics on our 12# rifles.

The MVA prize for high off-hand score required a 3-way shootoff between David Barnes, David Brady and Mike Mason who all posted initial chicken counts of 4 each. This was one of the more entertaining shoot-offs held as the initial 5-animal shoot between the group was met with a total of 15 resounding misses. Since ammunition was becoming scarce, we decided to proceed with a sudden death format. This required an additional 4 shots by each shooter until David Brady finally hit a chicken, ending everyone’s misery.

Our High Junior, David Ward, set a National Record by posting an impressive total of 23 of 40 and even hit 1 chicken in the process. What makes this feat all the more remarkable is that David is a true Sub-Junior, being only 11 years of age. Congratulations to David and we all hope he remains in the sport for many years to come.

Rounding out the top three places was David Barnes who bested David Brady and Gene Davids in yet another chicken shoot-off to determine the position of the 2nd thru 4th positions. O. J. Riddles won the spot of High Senior with an excellent effort of 25 of 40.

Congratulations to all of this year’s winners and we looks forward to seeing you back for next year’s event.