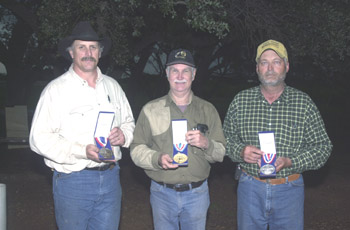 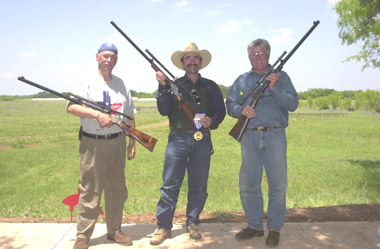 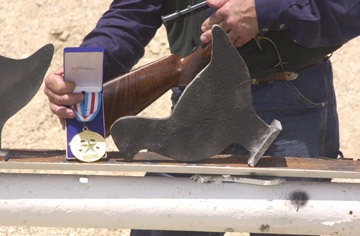 Forty-nine competitors met at the Fort Chadbourne Silhouette Club out of Bronte, Texas on May 5-6, 2007 to compete in the 12th annual Black Powder Cartridge Rifle Silhouette Championship. Beautiful conditions greeted us for the Saturday match while things deteriorated to storm conditions by the end of Sunday’s festivities. We later learned that a tornado had touched a short distance to the west of the range Sunday afternoon so we were very fortunate to finish the match. Unfortunately, reverse animal counts had to be used for tie-breakers as it was impossible to conduct shoot-offs due to weather conditions.

Congratulations to all of the 2007 winners and entrants. See you next year.

Fourteen competitors met at the Fort Chadbourne Silhouette Club out of Bronte, Texas on May 4, 2007 to compete in the 4th annual Black Powder Cartridge Rifle Silhouette Scope Championship. When the smoke had finally cleared, a tie for the championship betwen David Barnes and Bob Glodt remained to be broken by the ever-so-much fun chicken shoot off. It was agreed that a 5-shot match would be fired on chickens and if a tie remained at the end, a sudden-death chicken tie breaker would follow. As luck would have it, the competitors were still tied at the end of the first shoot-off and we entered sudden death where each shooter fired a single time and continued until the tie was broken by a single hit and miss combination. David Barnes was the first competitor to "hit" a chicken in the sudden death period after Bob Glodt failed to connect. The "hit" was a wedge shot between the chicken’s pad and rail that forced the chicken to fall over on his beak. The chicken was off his rail pad so the victory was awarded to David. The top three contestants were David Barnes 28/40, Bob Glodt 28/40 and Bobby Ivey took 3rd place with a 26/40. Congratulations to all of the competitors and we look forward to increased participation in next year’s event.