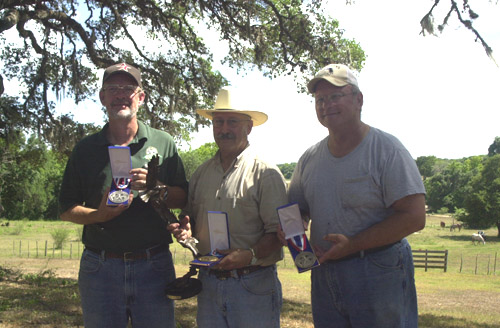 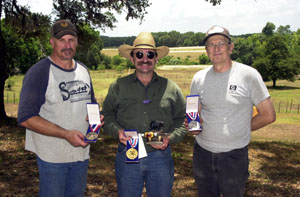 The 13th Annual Texas State Black Powder Cartridge Silhouette Iron Sight Championship suffered significantly lower turnout this year due in no small part to the ever increasing cost of gasoline. In spite of the higher costs to participate in this year’s event, we drew 36 competitors for the weekend’s events.

The day started with a volley fire from all participants after the playing of Amazing Grace by Judy Collins to commemorate and honor shooters from our discipline, and particularly the host club Yaupon Creek Silhouette Association, who have moved on the big range. It was a very moving event and one we hope to continue at future matches. After the playing of the National Anthem, it was on to the event that brought us all together and we proceeded to “make smoke.”

Conditions stayed warm and dry throughout with the exception of a brief popup thunder shower that interrupted us briefly on Saturday. Due to the lighter than expected shooter participation, we had 3 completely full relays and the match proceeded so smoothly, we broke for lunch each day, something we almost never get to appreciate.

When the smoke cleared on Sunday, the match winner had been determined and a shoot-off was required to settle 2nd and 3rd overall. Regretfully, my shooting partner had his usual miserable run of luck at the chicken shoot-off and settled for 3rd place.

This year’s contest was won by John Knesek of Columbus , Texas who fired a very respectable score of 62/80, one target short of matching the state record. For his efforts, John was also the High Senior which is a remarkable feat in a sport that tend to reward “young” eye sight. The 2nd place medallion was won in the shoot-off by Ken Wienken of Cat Spring with a fine 60/80 followed by Giddings own Don Claxton ’s 3rd place effort with the same score. Ken Wienken was also the recipient of the MVA gift certificate for the high turkey count.

High Master honors went to LeRoy Tanner of Houston (56/80), Gordon Hines of Coppell took High AAA with a very fine 59/60, just one shot out of the running for the top 3 spots. Bryan Rosenbaum of Burleson garnered AA honors with a 50/80, Donna Hare of Victoria was the High Woman with a 44/80. The pride of Brenham, Finney Clay claimed A class honors with a 44/80, while B class was won by Ed Knights’ 33/80. Our High Junior award was won by Tatiana Kirkland, competing in her first match, with a 22/40.

Our grateful thanks go out to our corporate sponsors who donated many of the match prizes. These include Black Powder Cartridge News, Montana Vintage Arms, Schuetzen Powder, Walters Wads, Swarovski, Shiloh Sharps, Brownells, Cabella, Starline Brass, Buffalo Arms and Wolf Western Traders, to name a few.

Finally, thanks go to our troops in the various battle zones. Don’t forget them.

In an event that can only be described as gasoline deprived, one of the lowest turnouts since this championship match was inaugurated was won by David Barnes. David is the first competitor in Black Powder Cartridge to successfully defend his championship. The second position was claimed by Gary Krutilek with David Burger picking up the third slot one shot back. Winds were very tricky and constantly switching from the south with velocities from almost nothing, to well over 15mph at times. While we had a nice breeze, as in cool, blowing in the morning, it turned downright hot shortly after a 15 minute shower which occurred at the mid-point of the match. Thanks all of you who put up with the heat, high gas prices and low turn out to participate.

A total of 5 contestants braved the heat, and high gasoline prices, to compete for the 2008 Texas BPCRS Scope Championship in early June. The weather in South Texas had been hot and dry in the weeks leading up to the Championship, with the lack of the El Ninõ winds we’ve experienced the past couple of winds helped reinforce the warm conditions.

On the Friday of the scope event, the skies were slightly cloudy and the temperatures started out warm. By the time we got to mid-day, it was downright hot. With the mirage swimming by and causing the animals to appear to shimmy in the skinny scopes, the day was very challenging for the shooters.

This year’s champion was David Barnes of Wortham , Texas who successfully defended last year’s title. In the somewhat brief history of Black Powder Cartridge Rifle Silhouette Championships conducted in Texas , this is the first successful defense of a title held in either scope or iron sights.

The MVA prize for high off-hand score on chickens was won out right by David Burger of Victoria , Texas who also garnered 3rd overall in the match. In addition to the 3rd place medallion, David won the gift certificate so generously provided by Montana Vintage Arms, staunch supporters of Black Powder Cartridge matches.

The 2nd place medallion was won by Gary Krutilek of Houston , Texas . Congratulations to all of this year’s winners and we looks forward to seeing you back for next year’s event.