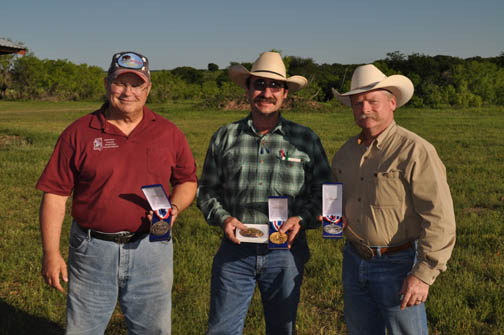 The scoped rifle match was conducted on Friday with a record number of competitors. 31 shooters came to test their metal against light winds, minor mirage, slightly overcast skies, and some of the hottest shooting the HOTSA Windy Hill Shooting Complex has ever witnessed! Last years record score of 31/40 was eclipsed by three competitors but ultimately it was David Barnes who came out on top with a new state record score of 34/40 to win the match and the coveted buckle. Kirk Martin was second with 34/40, and Kenny Tebbe rounded out the top three with a 32/40. By the end of the match, David and Kirk remained tied so we headed into a 5 chicken shoot-off. With a crowd cheering them on, David hit 3 chickens to Kirk’s 2 to be crowned the State Champion and setting a new state record score.

High Master honors went to Bob Glodt who shot a 29/40, and High AAA was taken by David Burger with a 29/40. Jack Hawkins drove over 700 miles to win the AA class with a score of 26, while Tommy Rose came out of retirement to win A class with a 23 and Berit Pace came through with a 21 to secure High B as well as High Woman. This match was a great start to our three day weekend competition and, unknowingly, set the stage for more fine shooting and new records.

The open sight match started on Saturday to a mixture of weather; high winds and spitting rain rocked the firing line early but just after dawn calmed to a mild breeze and cool temperatures. As the shooting heated up so did the temperature as the sun made its appearance and brought along the mirage for fun but this didn’t slow down the scores with David Barnes and Kirk Martin pushing each other again. David finished the day with a 37/40, seven chickens, to secure first while Kirk came in with 36/40, six chickens, to keep things interesting. Both scores were personal best and both eclipsed the previous state and range record score of 34 held by Roger Clark.

Sunday started day two of completition eerily calm, heavily overcast and humid. After the first volley of shots, the cloud of white smoke was almost choking but didn’t keep competitors on the turkey and ram lines from turning in a truckload of “10’s”. After two banks of animals the weather hand changed to sunny and windy which made shooting a little more difficult, and competitor’s who started on chickens or pigs, really had to work hard to tip 50 percent of their turkey and ram targets and the scores reflected this. Don Claxton turned in a 31 to win day 2 with Bryan Rosenbaum coming in second with 30 (3C) and David Burger third with 30 (2C).

This year’s competition was won by David Barnes with a new state record of 66/80. Kirk Martin took second with a 61/80 and Don Claxton took third with a 60/80. These three competitors mirrored their finish from last years match by repeatly securing this top 3 finish. Rounding out the winners circle was Gary Krutilek winning High Master with a 55/80, while Richard (Dick) Mills too High AAA honors with a 55/80. High AA was secured by Vance Ballew with a 54/80 and elevating himself up a class. Driskell Hollis, shooting in his first state championship, turned in a 45/80 to win High A.

The B class was a lot of fun to watch as we had 4 junior shooters pressuring each other with three of them shooting in their first championship and for 2 of them this was only their second big bore match. Ultimately, Tatianna Kirkland pulled off the win with a 28 to secure High B with Ashley Ballew nipping at her heels with a 27 to secure High Woman, and Keaton Loudamy pulling in 3rd with a respectable 25 for his first state match and did it with a 38 caliber…a next generation SPG in the making.

At the awards ceremonies, the highlight was the drawing for a Shiloh Sharps rifle which was kindly donated by the Shiloh Rifle Company and the Bryan family. The luck winner was David Burger who was speechless and humbled to win. We may regret him winning this rifle as David routinely wins his clubs matches with a transformed rolling block and now has plans to order a serious match rifle.

Some fun fact resulting from this match: David Barnes is the first back-to-back State Champion, first competitor to win both scope and iron sight matches in the same year, and first competitor to be in the winner’s circle 8 separate times in 6 years…not to mention a NRA National Championship win too! Not bad for a fella who is blind in one eye.

Personally, I’d like to thank my wife Nancy, as well as all the competitors and friends who made this championship match a successful first in my new position. I couldn’t have done it without a wonderful team effort and accommodating folks. Thank you.