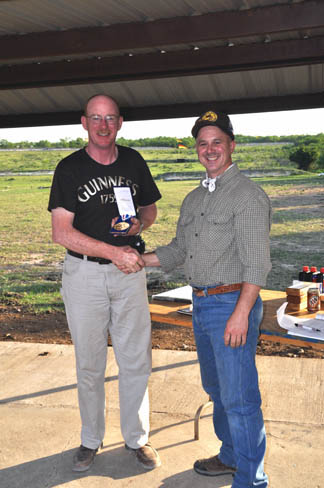 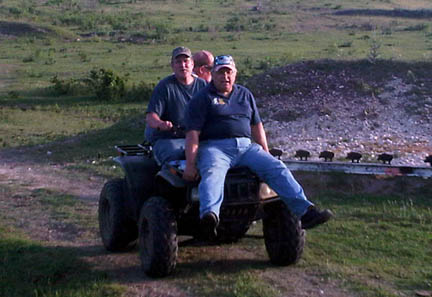 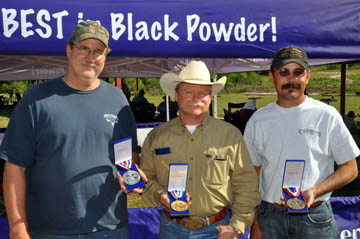 The scoped rifle match saw a record number of competitors as 36 shooters came to test their skills against a heavy head wind, minor mirage, sunny skies, and some of the most challenging shooting the HOTSA Windy Hill Shooting Complex has ever witnessed! Last years record score of 34/40 was safe this year but ultimately it was Kirk Martin coming out on top with a winning score of 31/40 and earning the title of State Champion. Jay Butts came in second with a 30/40, and Vance Ballew rounded out the top three with a 28/40. Kenny Tebbe took High Master with a 27/40; Gary Krutilek earned High AAA honors with a 27/40, while David Barfield of Mississippi won High AA with a 21/40. Rounding out the classes was Perry Lee of Missouri winning High A/B class with a 21/40. This match was a great start to our three day weekend competition and, unknowingly, set the stage for more fine shooting and new challenges.

The open sight march started on Saturday to deceptively nice weather that proved to be extremely challenging to shoot through. A heavy head wing from the west made the long-range targets at 500 meters a little maddening as one shot would go high, then the next shot low, completely missing the rams’ 18” body. Ultimately, Bill Wing from Salina Kansas was able to shoot through the tough conditions and pull out a win with a 28/40 for the day but his spotter Dan Zimmerman from Oklahoma City deserves a harty handshake for a solid performance in calling conditions. In sihouette, a good spotter is worth their weight in gunpowder. Mark Zimmer won AAA class with a 27/40, while Wade Loudamy muscled his way to the top of the AA class with a 24/40. Stan Jarosz, shooting in his first state match, stormed to the front of A class with a 21/40 and young Keaton Loudamy secured B class with a 10/40. With the competition over everyone headed to the Wortham Fire Department for their annual BBQ fundraiser and enjoyed some great food and fellowship.

Sunday, day two of the iron sight competition, started beautifully calm but it did not last for when relay one was called to the firing line, the head wind returned and gusted upwards of 25 mph. By the middle of the match though the sun brought back an old friend, mirage, which actually made reading conditions better and scores really shot up (pun intended). At the end of the day, it was Kenny Tebbe, with the aid of his priceless spotter David Barnes, who turned in a 31/40 to win the daily match and officially moves himself into the Master class for silhouette competitions. Bill Wing stayed steady winning AAA class with a 27 with Larry Cohen turning in a 27 to take AA class. Larry started the competition in B class but shot so well on Saturday that he is automatically moved up two classes to AA. When asked about his shooting and scores, Larry just grins and softly says “he’s been practicing”. Hollis Driskell secured A class with a 20 and the newest competitor Jack Garrett anchored B class with an 11.

The State Champion is determined by an aggregate of both match 1 & 2’s scores and this year it was Kansan Bill Wing who came out on top with a 55/80 and being crowned champ. Bill has shot this state match two other times and winning it this year left him speechless. Demonstrating superb shooting from the sitting position and coming in second overall was Larry Cohen with a 54 and David Burger of Victoria rounded out the top three with a 53. David is a very consistent competitor and was using the Shiloh Sharps he won at last year’s state match to stay at the top of his game.

Rounding out the winners circle was Kenny Tebbe winning High Master with a 52/80, while Dick Mills pulled a repeat performance from last years match and won High AAA honors with a 50/80. Wade Loudamy stayed steady and was crowned High AA winner with a 49/80, while Hollis Driskell came out on top of a 3-competitor shootoff to claim the title of High A with a 36/80. Keaton Loudamy, who was celebrating his birthday, came out on top winning High B honors with a 14/80 score and a double armload of prizes. Keaton is gleaning a ton of pointers from his dad, Wade, and is rapidly progressing with his 38-50 high wall.

At the awards ceremonies, the highlight was the drawing for a Shiloh Sharps rifle kindly donated by the Shiloh Rifle Company and the Bryan family. The lucky winner was David Brady who was speechless and humbled to win. David ownes more than a few rifles but has never had the honor of ordering a brand new Shiloh Sharps; now he will.

Personally, I would like to thank my wife Nancy, as well as all the competitors and friends who made this championship match a success. Countless hours go into preparing a range, repairing targets, and grooming the grounds getting ready for a big match. David Barnes deserves a big pat on the back for all his hard work, as does HOTSA’s newest member, Jack Garrett who donated new position number boards for the berms. Members like this make being the TSRA BPCR Match Director a rewarding position. Thank you