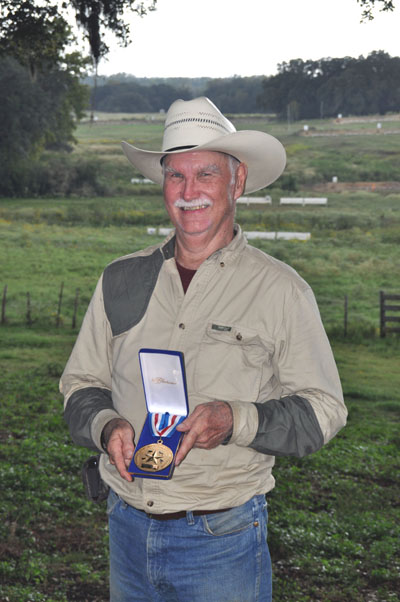 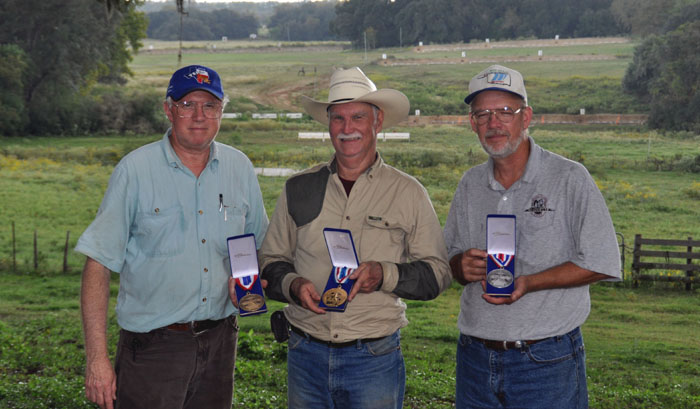 LeRoy Tanner was once again victorious, capturing the 2012 Yaupon Creek Club Championship. Rain once again visited our match, this time delaying the start of day 2 and giving us a 20 minute delay later in the day. We were determined to make LeRoy compete to the bitter end, plus a full 2-day match feels much more rewarding to complete. The top 3, LeRoy Tanner, Ken Wienken, and Tom Berwick are not strangers to the winners medal at this match, all having won before except for LeRoy, now a 5-time winner, who seems to peak at this time each year.

Congratulations to Dave Rolle whose name was drawn for the top door prize and Gary Krutilek who manage to snag the fine custom knife created by Ralph Cole. There was some discussion as to whether the knife would be chosen by the winner with the first ticket drawn vs the rifle. Thank you to all who participated in this year's championship event. I know there is a lot competing for our attention during this time of year and I'm happy you chose our 2-day shoot.

Many of our newer club members never had the opportunity to meet Butch Balcomb, the honoree of the annual Balcomb Trophy for the Ehrenscieb match, or as Butch used to refer to it, the Earl Schibe match in honor of the 1-hour car paint job guy. This year's trophy was won by Dick Mills, which makes the 2nd time he has had the privilege (?) of creating the next year's trophy. Thank you to last year's winner, Larry Hall, for creating this year's trophy. Larry departed from the tradition of incorporating the trophy into the actual target but since it was a very nice silhouette themed clock, it was best spared from the holes.

Congratulations to all participants who went home with some sort of prize for placing in the top 3 of their respective shooting categories. Hopefully, all will do better in next year's match as we endeavor to increase the competition factor for LeRoy.